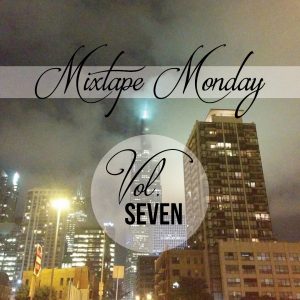 Mixtape Monday Vol. 7 is a good one: a dedication to songs and beats that have a little bit of grime to them. Nope, not talking about dirty in lyrics or anything about content, but rather beats that can only be described as being quite different from the rest – with a common connotation in exaggerated tones.

A lot of these songs have anthem qualities, in resounding repetitive beats, but lack the poppy, highly enthused cadence that allows for great dancing. Or suggests dancing rather. Instead these songs have that underlying foundation, but then they’re slowed way down. It doesn’t hurt that en masse the lyrics suit the tone – not a lot of excessively cheerful words.

An exception could be Kiko (103 words) by Absofacto (a favorite), but it actually looks like it has been stripped from Spotify, hence the embed is below. Why the extra effort? Because it’s a clinger. “Yesterday I wrote everything I know down in a notebook, as a person of the past, for future hands to flip through.” Like poetry. Actually, is poetry.